skip to main | skip to sidebar

This issue offers several perspectives on food's role in our political and cultural landscape. This week at my family reunion I kept thinking how far we have to go toward making food a part of our consciousness. I'm in the South, but I can't find a ripe peach to save my life. I watched 40-odd relatives consume acres of food, but none of it was produced locally--most of it was purchased in big bags or frozen boxes at the supermarket.

The sense of a place breathes out through its people through gesture and dialect; we should consider food another aspect of each region's social uniqueness. When you visit a place, don't just look at its landmarks. Visit its farmers' markets and taste the terroir of the region. Local flavor can filter down from our taste buds to our pens.

We are pleased to include work from the following writers in this issue:

Art is by Patianne Stevenson and Léo.

O America, o fat land,
In all your beefy cheesy glory, you are
Awash in lipidinous rivers and
Piled high with fluffed wheat rolls.

Your scar-spangled prairies
Are crawling with overfed burgers-to-be
Whose diet of grain and pharmaceuticals
Makes them long for the slaughterhouse.

God bless your powerhouse factories
Where dye is added to plastic
Manufactured to taste and feel like cheese
On the tongues of those who know no better.

Stripes and stripes of lettuce icebergs
(The only kind that don't melt these days)
Sprout from your starved soil,
Where pale tomatoes tumesce nearby.

The only thing fast about this
Assemblage of ingredients
Glued together behind tin counters
Is the swindle that this is food.

Your citizens grow slow and sick
From sea to grease-slicked sea.

Beth Winegarner is the author of Sacred Sonoma, Beloved, and Read the
Music. Her poems have appeared in Tertulia, Bardsong, Hot Metal Press,
Lime Green Bulldozers, and Dispatch. She lives in San Francisco with
her partner and daughter.


The Sound a Side Dish Makes

Another reason to avoid fried food.

Tonight, the remote is hers.

No palate for my paprika,
She craves instead the blandness
Of his salt and pepper hair.

Mid-bite I pause.
A brownie, a cookie, a scone, a blonde—
It doesn't matter:
The ingredients are the same.

Vinnie Kinsella lives in a world of words. He is the owner of Declaration Editing & Design, the publisher of Four and Twenty, and an instructor in the Master’s in Writing and Publishing Program at Portland State University. His writing experiments can be found on his blog, vinniekinsella.wordpress.com.

Picking fruit is a primal pleasure, delicious and free. If an abundance of summer fruit burdens a friend of a friend with a garden or orchard, I make jam with it —plum, apricot, whatever's available. As an apartment dweller without a garden, I depend on the generosity of those who garden for bags of lemons or pears. In my experience, gardeners are liberal in sharing roses, peppers, and peaches they've grown. Maybe with the bounty of a garden, I'd be more magnanimous. If I ever get to have a garden of my own, I like to think I'd be as generous as the Italian family whose garden I visited more than 25 years ago.

I was a college student in Florence during April and May, studying Renaissance art and cosmology. When I wasn't dealing with Botticelli, Dante, and Galileo, I was coping with the less-lofty new world of contemporary Italy. Our group of 22 students from Midwestern colleges lived at the top of an 83-step walk-up pensione at the intersection of five streets, in the city's center. In addition to a recalcitrant hot water system and a curtainless shower that flooded the bathroom, I was adjusting to breakfast and dinner at the pensione. Most of the students slept in rather than bother with the breakfast, which consisted, without fail, of cups of yogurt (tutti-frutti was popular), hard, flavorless white rolls, and the only bad coffee in Italy. (I believe the city got its water from the muddy Arno River; whatever the source, the water was also tinting our laundry green.) Cold curls of butter and plastic packets of jam added nothing to what we called pigeon rolls; that's all they were good for: lobbing at the pigeons so plentiful in the city. I didn't miss the ubiquitous American glass of orange juice, but I was accustomed to more variety. Dinner was a substantial improvement over breakfast: a thin soup, unsalted, chewy bread, and pasta, with minor variations, such as the addition of cooked spinach. Dessert was fruit: baskets of mealy apples and blood oranges, which I'd never eaten before. No one wanted the apples; speed was essential if you hoped to snare an orange.

Coming from California, I was used to more fruits and vegetables, so I often visited Florence's outdoor market, where I bought brown paper cones of raisins. Coming from a college in the middle of Iowa cornfields, I wasn't used to such an urban environment. Florence has an overabundance of beautiful buildings, statues, and other public art, but I don't recall any trees in the heart of the city. The Boboli Gardens across the river offered a highly manicured green retreat, far too formal for my taste. So when we had a field trip one day that included a surprise stop, you could say I was ripe for the opportunity.

Our day excursions by bus generally took us to other Tuscan towns—Siena, San Gimignano, Pisa—to admire their churches and art. On our return from Lucca, our professore, an American of Italian heritage, announced that we would be visiting a family he knew in a small town. We stepped off the bus into a sunny May afternoon. Near the road was a small strawberry patch, maybe 50 feet square, with carefully weeded rows of plants. The ground was the same gold-tinged terra cotta as the Palazzo Strozzi across from our humble pensione. When we met the Italian family, they told us we could help ourselves to their strawberries—an instant U-Pik-Em 'n' Eat-Em experience. There may have been some miscommunication; perhaps we were invited only to sample a fragola or two.

Bending and squatting, we plucked the warm, fragrant berries, and plucked and ate and plucked and ate. To the Italians, it must have resembled an attack of a murder of crows, disguised in blue jeans. In short time, we had reduced the strawberry patch to green leaves. This is not surprising when you consider that half our group consisted of insatiable omnivores, a.k.a.19-year-old guys, but all of us were hungry for fresh fruit. Our professor apologized for our voracious behavior, but the Italians seemed to appreciate our enthusiasm for their strawberries. Or perhaps they were simply polite. I don't recall the name of the church we visited in Lucca or, unfortunately, the name of the family whose strawberry patch we wiped out. But I remember those berries. Someday, when I have a garden—and I will—I think that when I invite students to help themselves, I'll limit it to one student at a time.

Pat Tompkins is an editor in the San Francisco Bay Area (aka Food Central). Her poems and fiction have appeared in Mslexia, Bellevue Literary Review, bottle rockets, Astropoetica, and other publications.

I like toast.
It’s simple but you can dress it up
With butter or jam
Or sugar and spices
A dollop of cream cheese
Is one of my vices—
But the smell is what calls me
To wait by the toaster
Leaving my coffee alone on the coaster
And breathing in the scent of love—
That overshadows any romantic notion
For the warm crispy goodness is my love potion—
So I savor my toast until the last crumb
Licking the jelly that is stuck on my thumb
And alas I am ready to start a new day
With my new morning mantra
Yes, toast is the way.

Jennifer Reich MA, MS, ANP-BC, ACHPN is an Adult Nurse Practitioner certified in Hospice and Palliative Care. She uses her diverse experience to design wellness programs and teach self-care strategies to nurses throughout the country. Her passion is exploring healing through story and reflection. 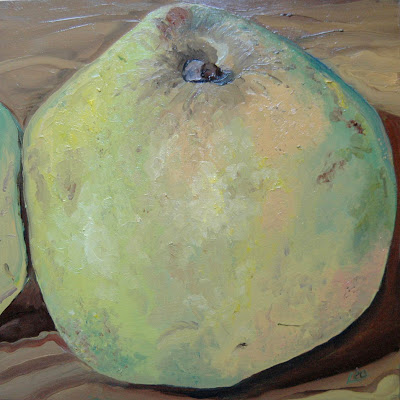 This pear will not improve.
Its flesh is crystally in parts,
elsewhere slobbery and soft.
The skin puckers around the stem:
a sphincter of resignation.

Day after day I have examined it
and then returned it to the bowl.
At picking, it was coppery
and smelled like summer light.
Now its skin is daubed with cankers
and smells of sweet decay.

And so, I lay the pear
down among the eggshells,
weeds and coffee grounds
in the compost bin’s black heat.
Come summer, it will nourish my tomatoes.
Think of it as a second chance.

Three weeks before the war began, two weeks
of freezing weather blackened leaves and stems
and bit hard at my garden’s needled roots.

Each day the news proclaimed
(between accounts of soldiers setting off)
this month’s cold the worst we’d ever had.

In my yard, frost burned lemons’ waxy hides
into burred white beehives and avocados
curled up like pill bugs.

By the day the war began, the cold was gone.
I remember walking that afternoon
(as black jets slit the face of Baghdad’s

Three nights after the war began, the wind
hurtled down these streets like someone running
away from fire. By morning, a drift of frost-bleached

leaves had made sand dunes of my yard.
Since the war, I have weeded, raked, and dug
the ground until my palms were bruised. Today

I lay tulip bulbs, squat and round as hearts,
in a bone-meal powdered trench. An erect
green stem pokes from each tuber’s brown, eager

and indelicate as a young boy’s cock.
I cover them with dirt. Dead men, dead boys,
half buried in sand. Arrogant green stems

have nothing to do with it. They died
uncounted, on a pocked and surly field.
Tonight rain comes at last.

Already the cold has been forgotten.

Dashka Slater's poetry has appeared in such magazines as the new renaissance, Descant, The Beloit Poetry Journal, and Blue Unicorn. She is the author of a novel, The Wishing Box, and three books for children: Baby Shoes; Firefighters in the Dark; and The Sea Serpent and Me. Learn more at www.dashkaslater.com.
Posted by Heidi Kenyon at 6:41 AM

...that go great together. Food nourishes the body, while literature feeds the soul.

Eat Your Words is edited by Heidi Kenyon: writer, cook, and the mother of three. We publish every so often. Check back when you're hungry for another helping of food-related poetry and prose.

Eat Your Words is a poetry and short prose journal featuring work centered around food and the growing, cooking, and eating of it.
Repeat: Submissions must have to do with food. Period.

We are currently seeking submissions. Please submit up to four poems of any length or prose (fiction or nonfiction) up to 1200 words. Previously published work is acceptable; please acknowledge prior publication, including blogs.

Send us your work at eatyourwordsjournal {at} gmail {dot} com with "Poetry Submission" or "Prose Submission" in the subject line. Send submissions in plain text in the body of your email; attachments will be deleted unopened. (If your work includes special formatting which can't be indicated in plain text, please explain.) Include a cover letter which describes your publication history and a bio of no more than 50 words. At this time, we are only interested in original work. Translations may be added to the site in the future.

We publish when we feel like it. Our response time is between two and four weeks, or more, or even less. We do not pay for publication. Work will remain in our archives indefinitely unless otherwise arranged. Rights revert to the author upon publication.

I blog about the intersection of poetry and copywriting here.